Almost without fail, the Eminent Person Speech reigns supreme as the element of the annual project that produces – in the estimation of teachers, peers, and self-assessment – the highest quality work. While there are inevitably remarkable pieces of work contributed to various aspects of the study, whether in Night of the Notables learning centers, interview coups, or blogged representations of learning, and in grade nine or ten, the Eminent Speech rises above.

This year, when polled on the

aspect of the study during which they produced their best work, a full 60% of respondents (at the time of this writing, constituting about 85% of the two classes) highlighted their efforts to craft their speech.

Added to this insight, a follow up question asks the TALONS to “describe the process that led to the success highlighted in the previous question,” allowing the process leading to this highly successful aspect of the study to come more clearly into light.

A surprise finding? The best work is the result of tireless effort. 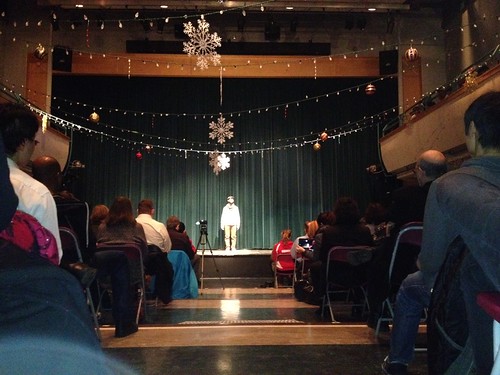 A grade ten describes their preparations:

I made sure to write my speech early on so that I had plenty of time to practice it. I practiced it until I knew it inside and out, so that I could recite it no matter what was going on. And having done that, when it was finally my turn to present, I wasn’t nervous at all.

Another thing that really helped was that a lot of the other tens took time to read my speech and help me edit it in the early stages. They guided me to what lines were a little awkward and how to fix my body motions.

Another ten offers the following:

First of all, this year I wrote my speech draft much earlier than the due date compared to last year. Due to this fact, I was able to receive a lot of great feedback from my peers during the writing process, which then allowed me to improve my speech even further. Once my draft was written, I was lucky that I had a lot of time to rehearse my speech. One step that led my speech to success during this stage was that I didn’t just rehearse the words, I also rehearsed body language and movement, and the use of the stage.

When I was writing, I didn’t limit my thoughts, writing down everything I wanted to include in the speech. By doing this, my speech originally was actually fifteen minutes long. I then took the time, with the help of my mom, to cut down the speech, take out details that weren’t needed, and rephrase events. I think that by writing down every single thought and event that occurred within the period of time the speech was focusing on, I was able to make the speech more thorough and interesting.

As does this one:

I believe it was the drafting process that led me to success on my eminent speech. I did a drafting process where I started writing, then got a better idea of what I wanted to say, and then I would start over. I did this until I didn’t quite start over, but edited previous parts until I was satisfied by the whole thing.

While this grade nine shares the evolution at the heart of his character’s metamorphosis:

During the process of writing the speech, I made a list of points that I wanted to include. After the first draft, I was struck with the idea of the extended metaphor of the caterpillar. I then wrote the second draft, taking the components of the first and smoothing it out. Finally, I edited and revised my speech to create more fluidity. 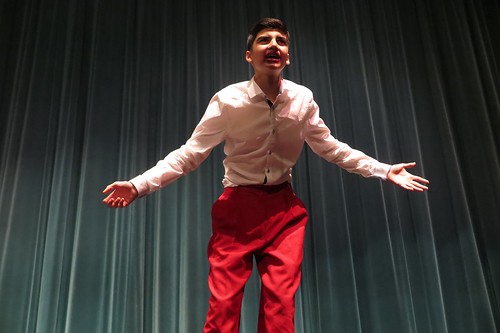 For many TALONS, the prospect of delivering an eminent address, whether in the classroom as the grade nines are asked, or on stage with the grade tens on Night of the Notables, is a daunting challenge. As Jerry Seinfeld humourously notes, for many of us public speaking is more popularly feared than death, meaning that “to the average person, if you go to a funeral, you’re better off in the casket than giving the eulogy.”

A grade nine offers this reflection on overcoming a longstanding fear:

I believe my speech was my best work because it was the one I exceeded my own expectations the most in. I used to be quite an abhorrent public speaker, always getting overly nervous, shaking, mumbling, and having a monotone; but in this speech I was able to overcome my nervousness and actually deliver it satisfactorily.

The key to overcoming this anxiety? Revision, feedback, and support:

“I think my speech content was pretty good, considering that it went through six drafts and many, many people gave me feedback.” 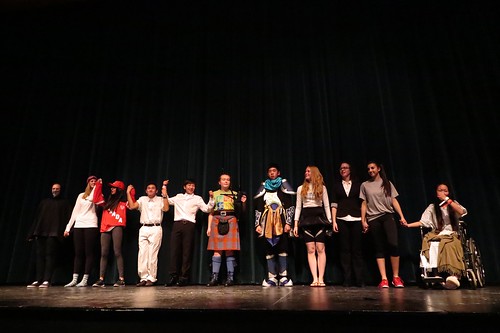 In another question, the same TALONS learner reflects on the contributions of a patient parent:

“My dad, along with giving me feedback on many of speech drafts, put up with me reciting my speech over and over in the days leading up to November 24th. Without his patience with me, giving me feedback and listening intently during the many, many times I recited my speech to him, I wouldn’t have had nearly as good a speech as I did. He gave me important pointers, such as where I started rushing, and he gave me confidence. With that confidence, I was able to deliver my speech well.”

A grade ten reflects on the input of a sibling:

“My brother contributed with helping me write my speech. Before I had written a draft that I was happy with I had written about five different speeches. But I hated them all because I didn’t think I was getting my main message across to the audience, namely that we shouldn’t stop because something is hard to do, that we should keep going until it becomes easy to do.

“One day I went to talk with my brother about my speech and how I wanted the audience to feel, and he suggested that I go for something powerful and try to address what [my eminent person] goes through as daily obstacles. This advice really helped me take a second look at how I was writing my speech and which side of [them] I wanted to show. Without my brother I wouldn’t have been able to re-think my speech and really focus on what was imported.” 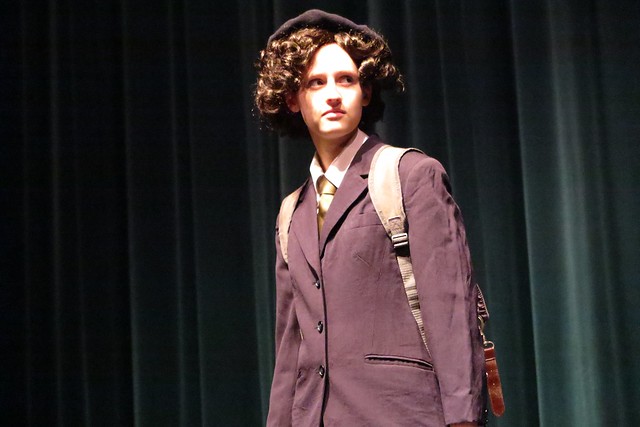 Another deals with overcoming a primal fear:

“Probably everyone out there knows that I do not like speeches, so even the fact that I did mine made me extremely happy.

“The writing process was extremely difficult. After changing perspectives three times and either going way over or way under the time limit, I was close to admitting defeat. Finally, I was happy with a fifth draft of my third perspective change. I was very happy with my written speech, but then came the delivery.

“Presenting my speech was probably the most nerve wracking five minutes of my life, but with the help of my friends, I managed to get through it. Before my speech started, I gave myself some goals and guidelines to follow. I reminded myself that, having not done many speeches in my life, this was not going to turn out perfect, so instead of worrying about that, I would focus on eye contact and pacing.

“My biggest goal was to come off as confident and though I’m sure more people knew how nervous I was, I believe that I was able to reach this goal (well, at least to some extent). While I’m still not ready to perform speeches without any hesitation, I’m glad I got this opportunity to face my fears.”

In responding to another question, a grade ten offers a similar account of working through the fear of performing at Night of the Notables:

What will you (or do you want to) remember about this project?

“I want to, and will remember the fact that I was able to manage my anxiety regarding the presentation of my speech on the Night of the Notables. I have never liked drama and performing arts, which is somewhat contradictory when you take my commitment and love of [competitive] piping into account. I can will myself to march calmly towards thousands of spectators, flashing cameras and judges at the world championships. Yet, when I have to deliver a two-minute speech to a hundred supportive and encouraging people I’m a wreck. When I perform with my band, I have a safety net; I have never needed it but I know it’s there. When I speak or play by myself, even if it’s exponentially easier than what I do with my band I doubt myself.

“I don’t give speeches in front of large audiences often, but I compete in solo piping competitions often and I have come to recognize the progression and stages of my anxiety. I have been working on becoming more comfortable in these situations for over a year and I think the Eminent Address was an important milestone for me. I was extremely nervous a few days before the night, but I was able to tell myself, ‘You always feel this way before something like this,’ and ‘Imagine how you will feel on December 4th’ and I was able to control my anxiety and give a speech I was happy with.”

Together, we are strong

Perhaps the theme running beneath all of this wild success though is the support and community that is taking shape in the TALONS room by late November, where each member of the class is learning that they are here to test themselves, and hold one another up above their prior expectations. Parents who get to see what the program is ‘all about’ for the first time at Night of the Notables often remark at how exceptional the grade ten addresses are – “I feel totally inadequate now,” the parent of an alumni told me this year – and wonder how it is their children and their peers have been so transformed. 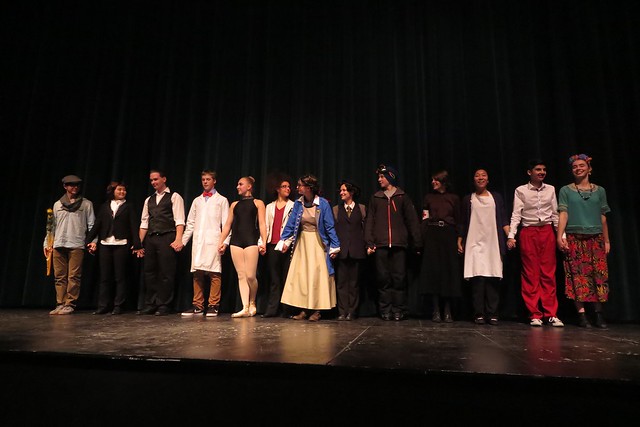 What they don’t know, or what cannot be seen, is what is often taking place behind the curtain, in those moments before the show, when greatness waits out on the stage under the lights to be seized.

Reflecting on this moment, a grade ten shares a glimpse of what community looks like:

“There was one moment when we were behind the stage, floating around and whispering encouragement to our peers. The atmosphere had become quiet and focused, as it was a couple of minutes until showtime. I was learning against a wall, breathing deeply.

“Our first speaker looked a bit nervous and was sitting against the wall next to the curtains. Someone, I can’t remember who, whispered something about the Superman pose, and how it was supposed to increase confidence and make you less stressed. So the majority of our class assumed this pose, and stood there in silence for about a minute. I remember looking at us and thinking that we were superheroes. Not just our first speaker, who looked relieved to have something to take his mind off the upcoming stress, but everyone standing there.

“We shared that moment behind the stage, trusting one another to make the night wonderful, and feeling that trust back in the tight, long-held hugs and the same emotions on everyone’s face. It was a really special experience.”

One thought on “Rising to meet the Eminent Speech”